Zilong Video - How To Play Zilong?
Worst Picks Against Zilong 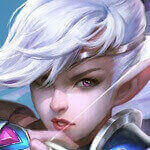 Zilong was born in the quiet and peaceful Cadia Riverlands. In his limited memory, he remembered his father being a craftsman who drifted around the land. Every year, as the seasons changed, he traveled back and forth between the north and south, while Zilong's mother held their young child in her arms with a smile, sitting in their carriage, watching Zilong's father yelling all the way. But that's where the memories of his parents ended. On the way to their next destination, a violent wind struck and destroyed their carriage, scaring away the horses pulling them along. After the wind subsided, the young Zilong found himself alone, his parents nowhere to be found. In his helplessness, the young Zilong wandered across the desolate wastelands for seven days. Through his despair and the countless difficulties that befell him, Zilong showed resilience and potential far beyond any ordinary person, and never gave up in his quest for survival. When Zilong was on the verge of utter exhaustion, a white-bearded old man with wide robes and gaping sleeves floated down to him and brought him to a mysterious place. After ascending a seemingly endless flight of steps, Zilong came to the magnificent temple of the Great Dragon. He was taken in by the Great Dragon and lived at the Dragon Altar for seven years. After these seven years, the Great Dragon, who had not accepted any more apprentices for many years, announced that he would choose a successor from either Zilong or Ling. However, the Great Dragon did not select the winner of the contest, the considerably more talented Ling, as his successor. Instead, he chose Zilong, who lacked the skill of his peer. Everyone was surprised and puzzled by the Great Dragon's decision. The adherents of the Dragon Altar all questioned the strength of this ordinary young man, and why the Great Dragon had chosen him as his successor. Only the Great Dragon knew of the potential that lay within the seemingly ordinary Zilong. Among his adherents, the strongest would always compete to exhibit their strength and the underdog would compete to improve their strength. The strongest would never be able to reach the same level of determination and open-mindedness as one who is eager to reach new heights of greatness. And soon, Zilong also justified this decision through his own actions. Although he was not the most outstanding student, he had a calm and resilient heart, an upright and brave personality, and a kind and selfless character. He was adopted by the Great Dragon, but often posed as an ordinary holy man, helping the people of the Cadia Riverlands through the calamities and hardships brought their way, and aiding them in times of danger and distress. These precious qualities possessed by Zilong seeped into the hearts of everyone in the Dragon Altar, and even into the hearts of the people of the Cadia Riverlands, earning him the trust and recognition of all. When Zilong was eighteen years old, the Great Dragon bestowed the Great Dragon Spear upon him, the most prized treasure of the Dragon Altar, in front of everyone. This Dragon Spear, which had witnessed thousands of years of history, not only contained unrivaled power, but also signified that the Great Dragon had formally handed over the responsibility of guarding the Cadia Riverlands to Zilong. In the following years, Zilong and his Great Dragon Spear traversed almost every inch of the Cadia Riverlands, defeating the powerful enemies who dared invade the Land of Promise one after another, and thus cementing his reputation as the savior of his people. But just when everyone thought that Zilong could truly take over the mantle of the Great Dragon and become a strong and dependable guardian of the Cadia Riverlands, his fated foe, Yu Zhong, appeared on the continent once again. Driven mad by ambition, Yu Zhong was banished by the Great Dragon. However, he unexpectedly recovered the reversed scale of the Black Dragon and returned with a vengeance. Under the guidance of the Great Dragon, Zilong, together with Baxia, Ling, and Wanwan, formed the Oriental Fighters, shouldering the heavy responsibility of protecting this peaceful and beautiful land from those who would destroy it.